Our mission at Six Nine Two is to help beach volleyball players realize their dreams. Our coaches use their experience, leadership, dedication and passion for the game to create a system that will allow our players to understand and excel at beach volleyball. We are constantly expanding and revising our system to provide our players with the greatest technical advantages. We aspire to create a supportive atmosphere and a positive experience that  will allow our players to reach success at the highest level. 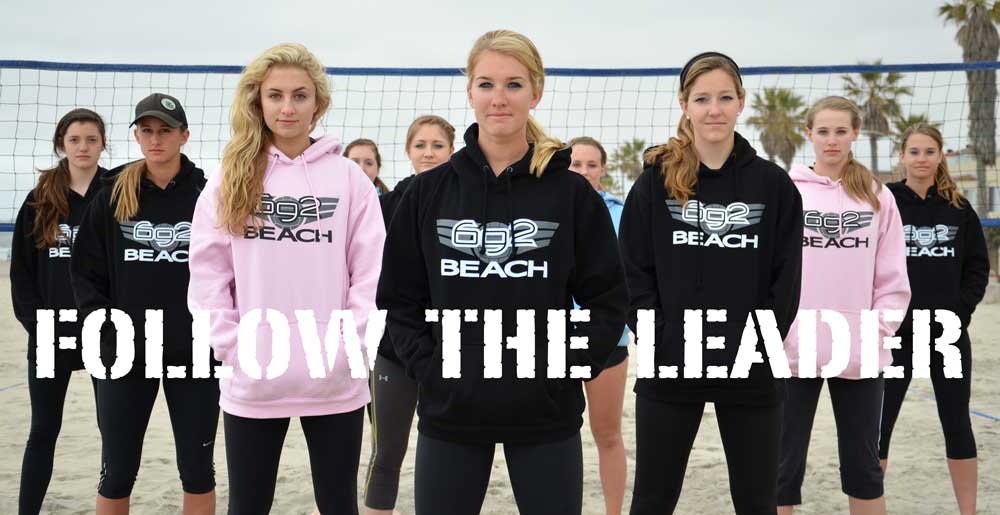 692 is a program in San Diego designed to train juniors in Beach Volleyball. Beach Volleyball for juniors is quickly gaining popularity in California and in 2008 we started a program called 692 that immediately became the most successful Beach Volleyball program in the country.   Beach Volleyball is now an NCAA sport and Colleges all over the nation are looking for beach volleyball players to represent their universities. Beach Volleyball in the past was a great way to develop your indoor game, but due to the popularity and success of the sport, it is now a new way to get a college scholarship! Some colleges have separate Beach Volleyball programs and some may use indoor players to form their beach program. We are developing a program to help our players get beach volleyball scholarships. They are available out there right now and we have been talking to the coaches of different programs to find out what they are looking for. We have taken recruiting trips to many of the universities to see their facilities and talk to their coaches. We are putting together a list of contacts for our players, helping them shoot videos, and taking them to the tournaments they need to go to in order to be seen by these prospective division one Universities. We are doing everything we can to make sure that we have the most comprehensive recruiting program in the country.

Our program is an elite team coached by professional beach volleyball players. Coaching beach volleyball for juniors requires a combination of playing experience to understand the game, and coaching experience to know how to teach the game. Our coaches have decades of experience doing both and this has given our program a five year track record of producing some of the best juniors players in the country. Our programs success is proven on the podium. We have trained dozens of players over the last Six years that have dominated California in every age group, trained at the Olympic Training Center, and have been invited to represent the US in international competition.

Our team practices twice a week during the summer season at South Mission Beach. Our practices are on Monday & Wednesday or Tuesdays & Thursdays. These practices include a 90 minute practice combined with a 45 min plyometric and conditioning workout.  The workout portion of these sessions is specifically designed to increase the girls’ verticals and develop speed and stamina in the sand. All practices and all tournaments are completely optional, so if you have vacation you need to work around, no problem. Our most successful teams will be at most practices and play in most tournaments, but some of our teams will only play in a few tournaments. Your commitment level is entirely up to you.

“Out of all the organizations that we have been a part of, 692 has been the most professional, understanding, and dedicated coaching staff. Jeff’s integrity is truly about the welfare of the children who belong to 692!”

“Our daughter, Iya has played beach volleyball at 692 for 3 seasons. We have been very happy with the program and the amazing coaches that Jeff brings on board for each season. Iya takes volleyball very seriously and playing at 692 allowes her to grow as a skillful volleyball player, a leader, and a more confident young adult. Jeff is great at communicating with parents and always available to answer any questions or concerns. Thank you 692!”

“Tess and Riley took 3rd place in their first tournament together early in the season, persevering to beat some top contenders in their age bracket. Given only a few practices together at 692 under your instruction, these two learned to put forth some key beach vb skills to take 3rd and were narrowly defeated in their quest for 2nd place. In the end, these two girls learned the importance of working together, implementing their beach volleyball skils while continuing to have a great time together. 692 has promoted a structured, skill-based environment while promoting a special bond and respect among the players. The combination of high level beach volleyball instruction and conditioning on the beach during the practices, promoted progressive athletic skills which prepared the players for top level competition. Jeff’s years of experience, his skilled group of coaches, and supportive competitive environment is what keeps us coming back to beach volleyball at 692!” 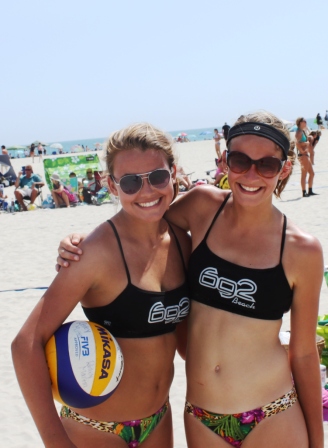 “Our daughter started 692 three summers ago when she was as a beginner. The quality of instruction and experienced coaches helped develop her skills and court sense quickly to a new level and she began to excel in competition that first summer. An added bonus was the new friendships she developed and still maintains today – 3yrs later. We also liked the fact that 692 offers a strong competitive environment where good sportsmanship and respect are emphasized as well. The second summer a lengthy injury took our daughter out for a season both indoors and beach, but during that time off Jeff continued to be reachable, supportive and interested in her overall well being – and that made all the difference! Without a partner and not in great physical condition she was hesitant to join 692 again, but Jeff was encouraging and inspiring by sharing his own stories of injury and return to vb. 692 staff was willing to let her have a modified exercise plan with a gradual return. We credit 692 for getting her back on her feet and playing competitively again. Thanks for caring about all your athletes!”

“My daughter’s volleyball skills and confidence improved so much in her first season of beach volleyball with 692! The coaches are thorough in the techniques and strategies they teach. Because they are all so encouraging, they make hard work fun!”

“My daughter, Riley, was introduced to sand volleyball when Jeff started coaching the La Jolla High School club team and continued with 692.  I cannot overstate the positive influence Jeff had on her life and future. Jeff provided Riley with confidence, skills, and a vision that, with hard work, she could play in college.  This was spring of her junior year and we had already dismissed any hope of ever getting a scholarship to play indoors. In a matter of 4 months, thanks to Jeff’s training and guidance, smaller colleges started to show interest in having Riley play for their sand team.  Jeff suggested that Riley wait until spring of her senior year before committing. It paid off when LSU offered her a scholarship! She’s now thriving in Baton Rouge thanks entirely to Jeff and his staff at 692. Even if your daughter doesn’t play in college, 692 will give her confidence, discipline, and an appreciation for the importance of exercise and nutrition.  Plus, the sport is a blast to play and watch!”

“We are so glad we went with 692!  Our girls got real sand volleyball training, not indoor court training in the sand.  The coaches are the best – they are always active, always involved, and always motivating. Our family is hooked!”

“Simply put…. 692 is the most established and most competitive beach club in San Diego and Jeff Smith runs his club with the knowledge and experience it takes to succeed. The girls train hard, work hard and play hard with Jeff at their side offering the encouragement and the guidance it takes to win. His sense of humor and competitive spirit coupled with his caring nature enables him to establish a unique relationship with each of his players to help ensure growth and success.This is Camille’s 4th year with 692 and the program just keeps improving!! Thanks Jeff for your hard work and dedication.”

“The 692 Beach program provided a physically demanding, fun and exciting way for my daughter to play volleyball when she started at age twelve. After four seasons, the 692 Beach Volleyball program clearly improved my daughters strength, agility, quickness and ball control, but it also did great things for her enthusiasm and understanding of the game, both indoor and out.”

“This was my daughters first season at 692 and I do wish I started her earlier. I cannot say enough about 692 and their staff. Jeff and his staff had made my daughter not only a better player but also a smarter player. The coaching staff are very knowledgeable and approachable. They encouraged and brought out the fierce competitor in my daughter. I would highly recommend 692 to any parent. I saw the difference in her jumping ability when she returned to indoor volleyball. Can’t wait for the next season.”

“Being a new parent in the youngest age group I had no idea what to expect. I had heard that 692 was the place to be for girls that were serious about beach volleyball. Well, now that the year is done, I totally get it! After watching a good dozen plus tournaments its so obvious that no one trains or plays the way 692 does! Our girls were amazing, working extraordinarily hard all year and learned what beach volleyball is all about. Kelly absolutely loved it, became an incredible young sand volleyball player and will play 692 beach volleyball for years to come.”

“Simply put, Jeff is a fantastic coach.  Jeff’s outstanding coaching skills are widely known and evident in the sand.   Jeff’s knowledge, experience, and passion for the sport is undeniable. What differentiates Jeff is the care and commitment he provides for his players beyond the sand and the season.  Whether you want to train, find a new partner, need technical guidance, want to take your game to the next level, need help talking to college recruiters or coaches, Jeff is proactive, supportive, and available year-round.”

“The team of great coaches and strength trainers truly have a complete approach both mentally and physically. They focus on, and mentor, each player. Our daughter learned to “own the game” and her play dramatically improved in a very short time in both indoor and beach. Their training enabled her to make the USAV Junior National Beach Team. She was constantly inspired by the staff and the training they gave her.”

“Our daughter was ready to take her sand volleyball to the next level, but our only road block was that we live in Arizona. So we decided to give our daughter an opportunity to play in California for the summer.  After making the 692 West team, our daughter and our family were welcomed with open arms. The team atmosphere and the coaching are superb. 692 also did a great job of being present at tournaments and coaching when the teams needed it. We believe that with the coaching and training of 692, our daughter will get to that next level of play. Thank you 692! We will see you next summer.”